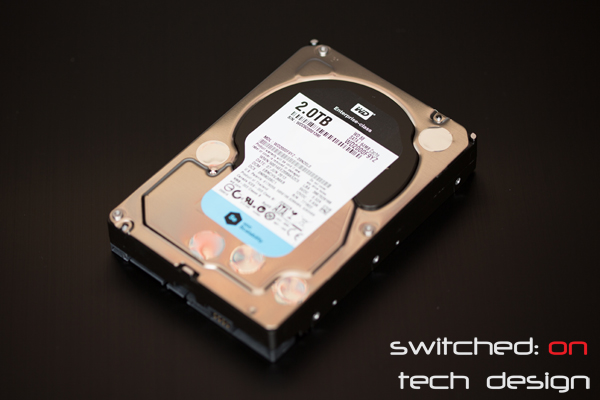 Today we are looking at a new line of drives from Western Digital – the Se range. Click through to read our review of the baby of the new line – a 2TB drive…   Western Digital released their Red line earlier this year – a SMB/NAS-focused drive, designed to be used in arrays of up to 5 drives. Now they have released their Se line, which is positioned directly above that in terms of array size – these drives are aimed at SMB and enterprise arrays which are cost-conscious and do not need the performance of the Re line. The tagline: 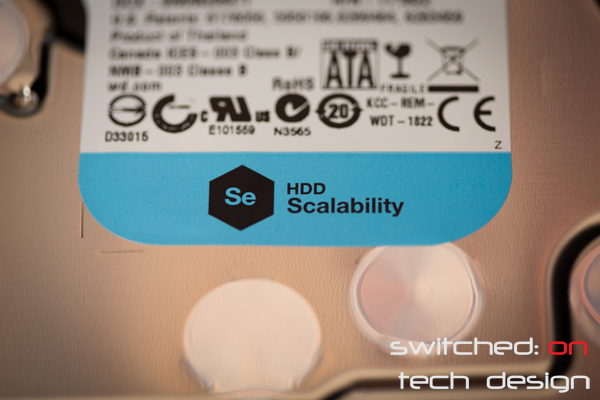 “HDD Scalability”. This drive is designed for bulk storage which needs to be scaled out over time to meet growing storage needs. The drives come in 2, 3 and 4TB flavours – today we are looking at the smallest of the range, the 2TB. The whole Se range is 3,5″, 7200RPM and features 64MB of cache. As expected from a modern drive they are SATA 6gb/s, and are backwards compatible with SATA 3gb/s controllers. The drive is quite heavy in the hand, weighing in at 750gm – about 100gm heavier than a 2TB Green drive. 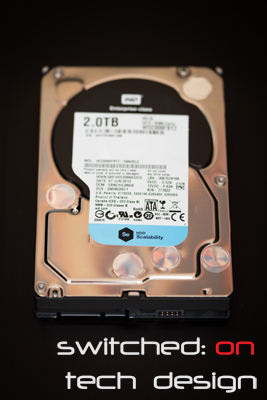 Apart from being noticeably heavier than the Green line, the drive is reasonably unremarkable otherwise; side and end views: 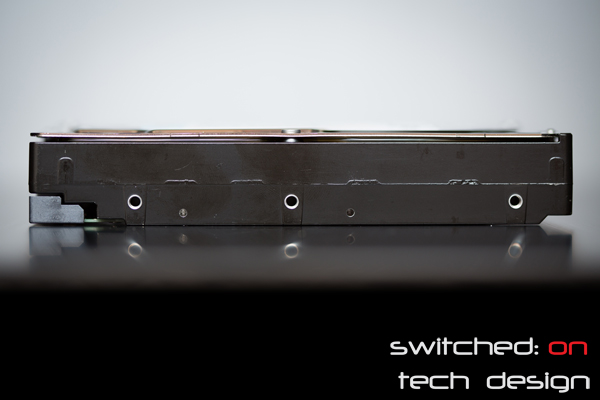 millionaire website dating   https://www.sotechdesign.com.au/canada-casual-dating/ SATA and power ports in the standard position and there’s not a great deal to see otherwise. The underside:   jake mcdorman dating It certainly is packed right out to the edge of the 3.5″ spec – there’s not much space left unused. A closeup of some of the underside:   gay dating aps   The PCB is held in in some places by metal clips rather than screws; not something we’ve seen recently on a drive. The breather hole is near the center at the top of the drive: 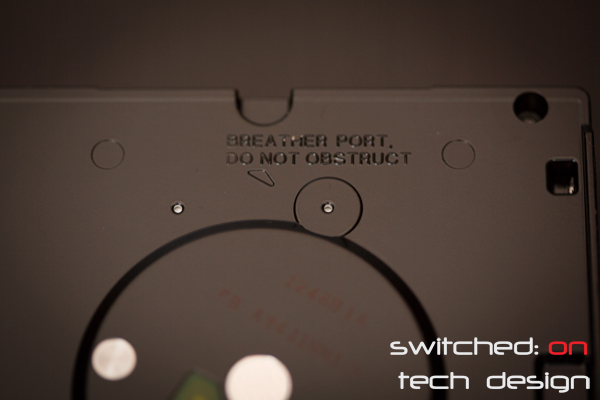 …and the PCB is held in by Torx screws, as is common: 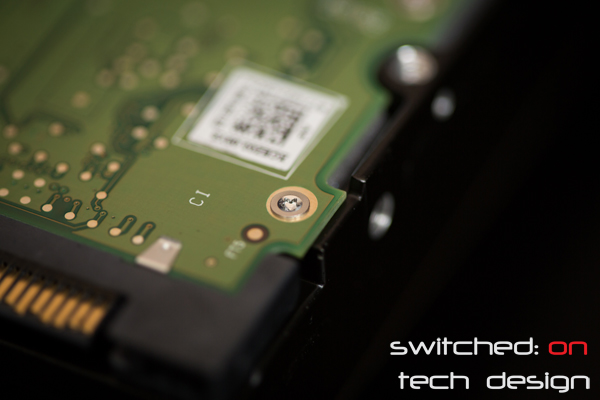 A closeup of the PCB for those who are interested:

In terms of drive features, the Se range have more in common with the Re and Xe range than the Reds and Greens – they have TLER, StableTrac, RAFF and an order-of-magnitude better unrecoverable read error rate than the Reds/Greens. TLER is Time Limited Error Recovery – this is important for hardware RAID arrays to prevent them from marking drives as failed due to being unresponsive due to a lengthy error correction attempt. StableTrac means that the drive motor is secured at both ends, rather than just as the base as is typical for most hard drives. RAFF is Enhanced Rotary Acceleration Feed Forward (that’s quite a mouthful…) – this is a feature designed to combat the effects of vibration, and WD claim it is quite effective at reducing the performance impact of vibration typically found in large drive arrays. The Se drives are rated to 600,000 load/unload cycles – same as the Re line and twice as much as the Black line. The other lines don’t have an official rating for this metric. Mean time before failure (MTBF) is 800,000 hours – for what it’s worth the Red line have a million hours MTBF, and the Hitachi 2TB enterprise drive has a rating of 2 million hours MTBF.   Peak read and write power consumption is high if you’re used to the ~5400RPM 2TB lines, but in-line with similar 7200RPM enterprise drives – 9.5 watts peak read, and 9.1 watts peak write. Idle is quoted as being 8.1 watts. In real-world terms, assuming approx 30c per kilowatt hour (about average for around here), using WD’s numbers this drive would cost $21.29 per year to leave running idle. That doesn’t sound like a lot on it’s own, but given that this drive is likely to be used in arrays of 6-24 drives it can certainly add up – for 24 of these running idle for a year it’s $510 in electricity, and you can expect it to be a touch higher than that since they’re not going to be sitting around doing nothing for that length of time. For 48TB of high-performing hard drives, that’s really not a bad figure at all – considering the value of what’s going to be stored on 24 drives this expensive, the running costs should be quite a bit smaller. If that’s not the case, the Green line looks much more appealing…   So, let’s cut right to the chase – how does it perform? Using HD Tune Pro, we ran a series of benchmarks – first testing read speed across the platters: 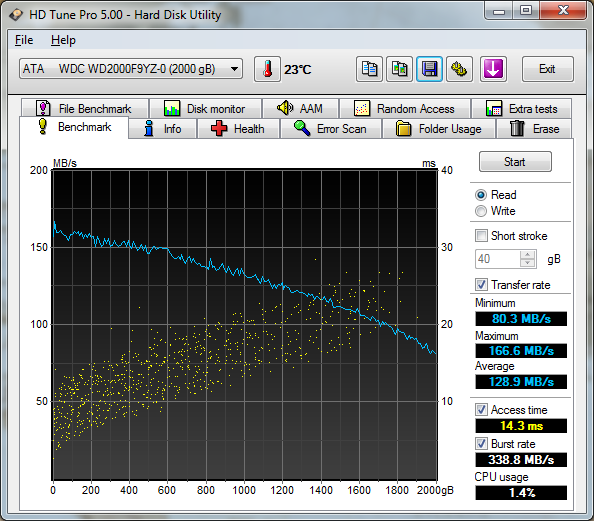 With a peak of 166MB/s at the edge and 80MB/s at the inside of the platter the drive manages a respectable 128.9MB/s on average. Write speeds are a similar story: 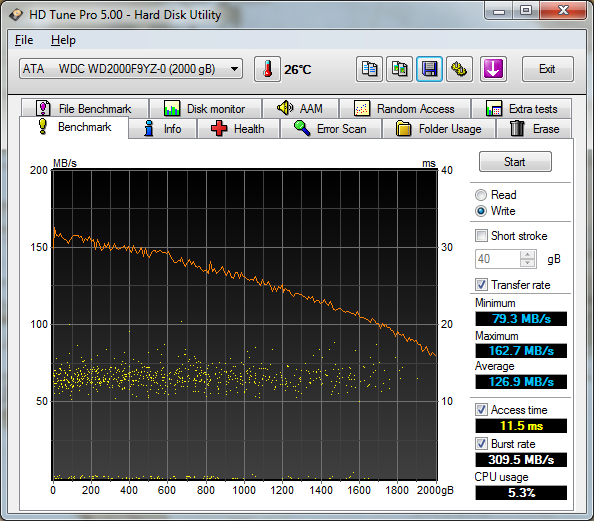 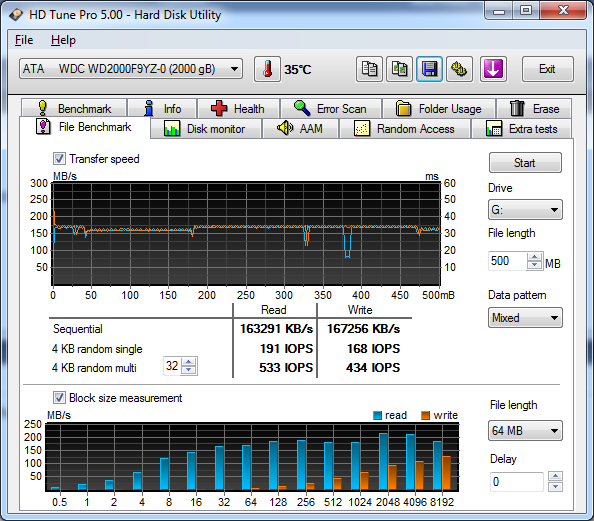 As you would expect from the previous benchmarks, the drive sustains between 160 and 170MB/s for both reading and writing. In terms of IOPS: 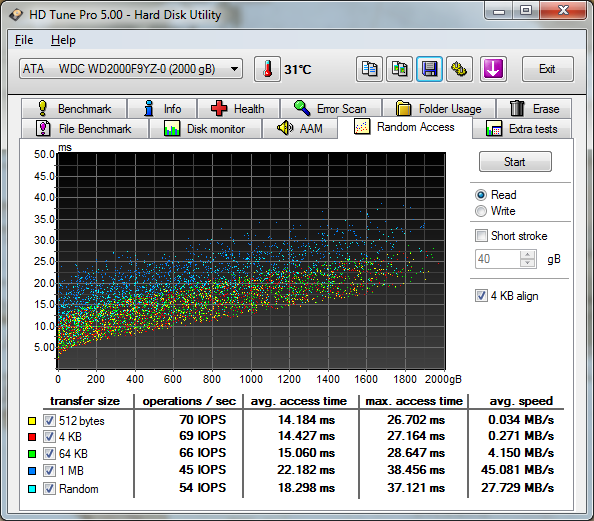 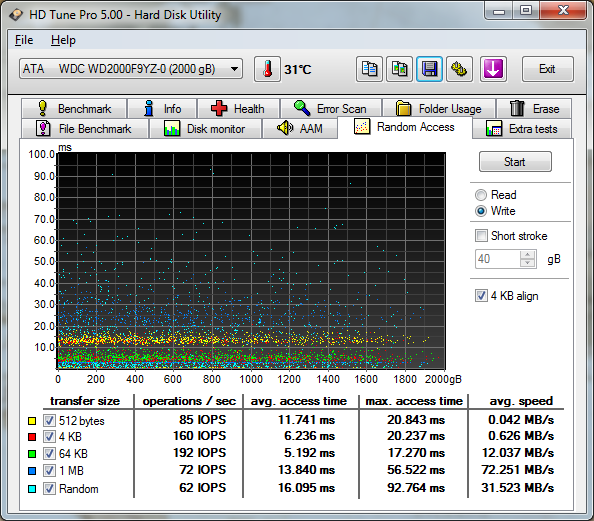 HD Tune Pro offers some additional tests, for those who are interested in a particular I/O measurement: 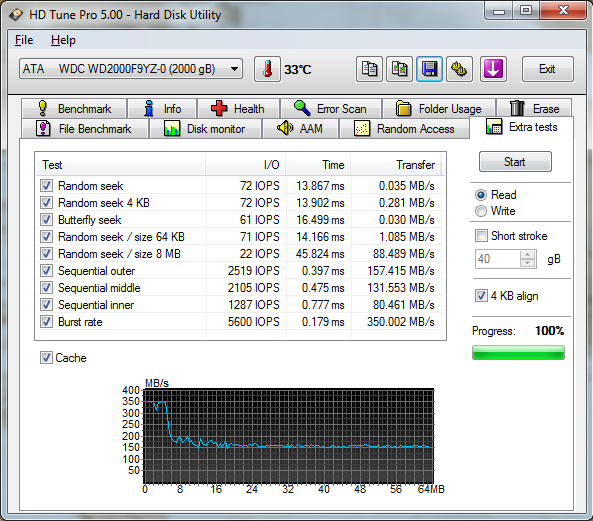 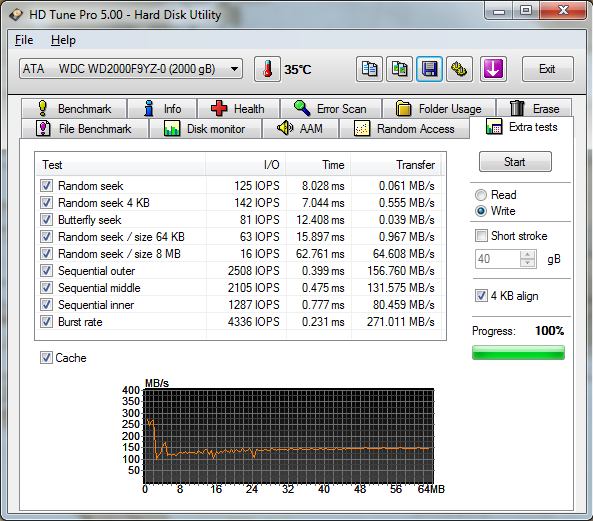 We can also see which SMART parameters are available to us: 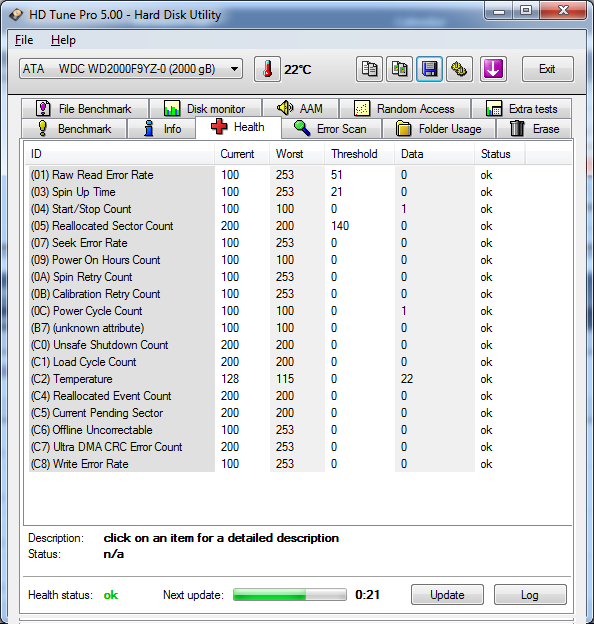 Western Digital generally have quite a good array of SMART data available in human-readable format and this drive is no exception.   The drives are reasonably noisy compared to the very quiet, consumer-oriented drives – 31dbA idle and 34dbA seeking. The seek noise in particular is noticeable in a quiet room with an otherwise-quite system, but goes completely unnoticed in a server room. By way of comparison, the 2TB Green is 24 and 29dbA and the 2TB Red is 23 and 24dbA respectively. As far as drive temperatures go, in a Norco 4224 chassis the 2TB Se runs about 3 degrees hotter than the nearby WD 2TB Green drives – 33 and 30 degrees respectively, with the chassis being cooled by 3 quiet 120mm fans and an ambient temperature of 20 degrees.   The Se has a 5-year warranty – this is the most that Western Digital offer and is in-line with the Re and Black lines. The Reds and Toshiba 2TB drives have a 3-year warranty and the Green/Barracuda 2TBs have a 2-year warranty, so by comparison 5 years certainly stands out amongst the other available 2TB drives. Hitachi also have an enterprise 2TB drive with a 5-year warranty, but it’s 512-bytes rather than 4K sectors and doesn’t seem to be as readily available compared to the WD lines. The warranty length is somewhat reassuring when you’re looking at spending $175 on a 2TB drive – the peace of mind of knowing that you will have a working drive sent back to you for the whole 5 years should it break is valuable.   Pricing-wise, the 2TB Se is currently $175 – approx. the same as a 2TB Black ($169) and close to double a 2TB drive from basically any manufacturer (Toshiba, WD, Seagate are all around $99).   So, how does it stack up? One of the drives we have been asked to compare to most often is the 2TB Red line. Looking at these two, the Se’s performance is more consistent – around 20% greater minumum performance and 10% greater average performance, and the warranty is 2 years longer to boot. The downsides? Power consumption is higher, and the Se costs $50 extra (AU pricing). The advantages of the additional features like StableTrac, dynamic head fly height, dual actuators and the better unrecoverable read error rate are harder to measure in terms of dollar value but they certainly won’t hurt. The improved unrecoverable read error rate can be important for reducing the chances of a catastrophic RAID5/6 failure during rebuild… and nobody likes going to their backups, so this is a worthwhile improvement. The cost of running 24 of the Se drives over 24 Red drives will be somewhere in the vicinity of ~$200/year for AU users – whether this sounds like a lot to you will probably depend on just how much data you’re storing and whether it’s for home or business purposes. 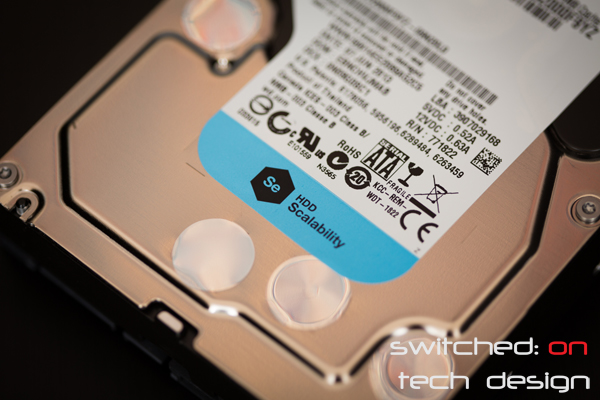 For a home-user these drives are probably not all that interesting; Green drives are quiet, close to half the cost and use less power. The Red line fits in neatly above that, with better performance, good acoustics and features which match small RAID arrays and small NAS units for about $30 more. If you need more performance and the (equal) longest warranty available along with a number of additional features to improve reliability, the Se line fits the bill at $50 more again. The longer warranty is a good way of predicting your storage costs over the coming years – the cost of RMA’ing a drive is a fraction of the cost of a new drive, and for businesses in particular having predictable costs is a welcome benefit. These drives are probably going to be of primary interest to businesses and home enthusiasts who are willing to pay for the slightly higher running costs in exchange for greater performance, quoted greater reliability and the longer warranty.