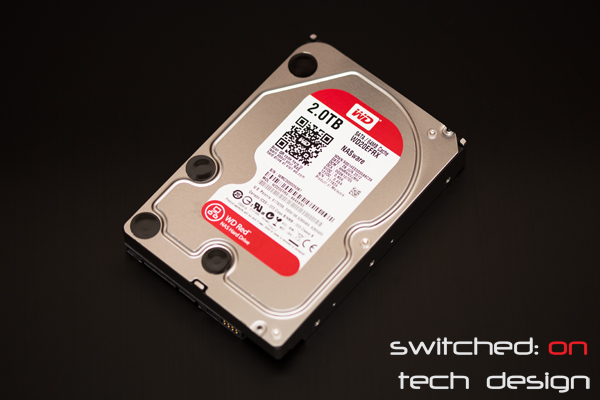 Up until now Western Digital have separated their hard drive lines into three; Blue for consumer drives, Green for low-power drives and Black for performance. This has now been expanded with a fourth colour added to the stable; the WD Red NAS hard drive range. Western Digital tout these as being designed specifically for the usage patterns typically seen in a network-attached-storage (NAS) device – generally 24/7 operation, potentially poor ventilation and the likelihood of being in a RAID array of some description for mass media storage.     Western Digital do suggest that they only be used in 1-5 bay NAS systems and recommend their (twice as expensive but 5-year warrantied) enterprise drive range for systems beyond that. The Red warranty is 3 years compared to the green’s now 2 year warranty – WD quote the new drives as having a 35% improvement in their mean time before failure statistic (MTBF), now a million hours. The number of load/unload cycles the drives are rated to has also increased – 600,000 in a Red vs. 300,000 in a Green. Physically the drives are the same size but are slightly lighter – around 40 grams lighter for the 2TB version. WD state that they have worked with NAS producers to create the drive’s firmware – optimized for NAS use and tested for compatability in a range of NAS systems.   One of the more interesting specifications put forward by WD is the 3D Active Balance Plus (was there a non-Plus…?) – this is supposed to improve performance and reliability by reducing the impact which vibration and noise have on the drive. Both those factors have been proven to impact on both performance and drive longevity so anything that helps reduce that is good as far as we can see.

Of interest to people intending on using this drive in a hardware RAID setup is what sounds like the reintroduction of TLER – time limited error recovery. This is one way of preventing drives from going into a deep recovery mode and dropping from a hardware RAID array unnecessarily – a feature which will be welcomed by anyone with that sort of setup, though not of significant importance for those using software raid setups like mdadm or ZFS. WD also list Command Completion as a new feature – stating that the drives are able to complete the command in process when a power outage occurs, hopefully reducing the chances of data corruption due to an unexpected interruption in operation.   The stated non-recoverable read errors are identical between the two lines – 1 in 1014 – if you want better than that you’ll have to look at the enterprise line which is one order of magnitude lower. Formatted capacity is identical and the new drives are Advanced Format like the greens – requiring ashift=12 in ZFS filesystems to get the best performance.   Western Digital are also claiming a noticeable reduction in temperature for the new drives – so far in our testing we’ve seen around a 10% reduction in temperatures in use, both at idle and under load when compared to WD’s 2TB green drives (S or X) in the same chassis. The power consumption figures for the 2TB Red look good, at least on paper – 4.4W reading/writing, 4.1W idle, 0.6W in standby or sleep mode. The read/write and standby figures are lower than the Green line but the quoted idle usage is actually higher – the 2TB green drives are 5.3/3.3/0.7 respectively, so if your drives are largely idle chances are that the Red drives will actually use more power. If they’re mostly doing read/writing or in standby or sleep mode you ought to save some money with the newer drives, though.   As far as performance numbers, we have benchmarked some of the drives for sequential read/writes – the kind of usage that most are likely to see in a NAS (streaming media files and the like). The numbers are 15-20% higher than the equivalent Green drives – we managed a consistent 123MB/s sequential write and 138MB/s sequential read. This is not too far from WD’s quoted performance of 145MB/s for this model. If you are after more in-depth performance numbers check back in a week or so – we will be updating with additional performance numbers as we get them. Those numbers are based on the drives being attached to a variety of M1015s in IT mode in a full Norco chassis. 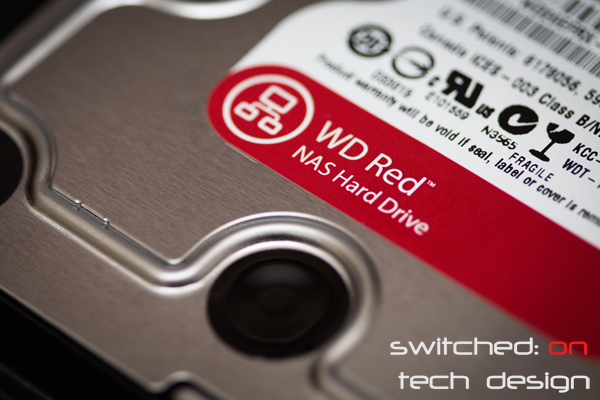 Current pricing at the time of writing is around $155 for the 2TB drive – this is about $40 more than the equivalent WD Green drive, so our conclusion comes down to this: you’re paying $40 more and getting reduced read/write power consumption, lower temperatures, higher performance and a longer warranty. The warranty and stated higher MTBF is an encouraging sign of faith from WD in the longevity of these drives, and we would say that they’re well worth considering for anyone purchasing more media storage.